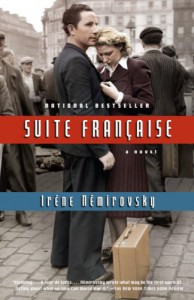 5 stars = A+. An unfinished masterpiece, a snapshot in time of German-occupied France in World War II. I haven't read a book this powerful or engrossing in a very long time. The book is comprised of two novella-length stories, which are:

1.) 'Storm in June': follows several Parisians as they flee the city after they learn of the collapse of the French army and the advance of the Germans. I thought this story had an almost dream-like quality about it: the prose is so gorgeous, descriptive and lush. There are several passages here that just resonated very strongly with me, because they were so eloquently described. I also felt that the author captured the essence of real people. So often, characters in stories are a little like Sims characters: not really, totally human, but you pretend they are, anyway. The characters in 'Storm' just felt so real. Real people, with all their vices, vanities and ridiculousness on display. It made the read all the more compelling for me, because every character felt so genuine and life-like.

2.) 'Dolce': this story was about the arrival of a German regiment in a little French country town, set after 'Storm'. The French and Germans form uneasy relationships with one each other, discovering that they really are more alike than different. This revelation is highlighted by the growing relationship between a young German officer and a pretty, kind Frenchwoman whose soldier husband has been taken prisoner. I found this story to be sad and emotional; the strange friendship/chaste love affair between Bruno and Lucile was heartbreaking, really well-drawn. I kept thinking that in another time and place...maybe... Tragic. Just a beautiful read, though. Slow-paced, but melodic -- Bruno refers to his time with Lucile as the eye of the storm, everything is raging around them, but it's calm in the center, where they are. It's a great way to describe the story: a quiet rumination of every-day events, emotions and relationships, set against the backdrop of a horrific, brutal war.

A little background: Suite Française was written by Irène Némirovsky, a Russian-born Jewish woman who emigrated to France after the Russian Revolution in 1917. A gifted writer, with an amazing, clear writing style, she was still in the process of writing this novel when she was deported from France and murdered by the Nazis in 1942. She envisioned the finished novel as being a written symphony, to have five parts -- however, only two (unfinished parts) were written at the time of her death.
Tweet