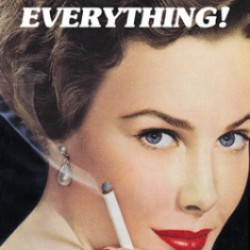 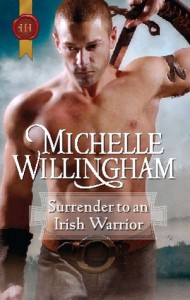 The story is pretty average Harlequin Historical stuff. It’s, more or less, modern people running around a fantasy version of historical Ireland, circa some random Hollywood Medieval year. So, the plot: Morren’s village was attacked by a Viking clan. She was raped and left for dead. She’s now having a miscarriage in an abandoned cottage where Trahern, the hero, is trying to save her life. The only reason that Trahern is in this part of Ireland is because he has come to avenge his fiancée, who died in the raid on Morren’s village. Together, they must discover who raided the village, which proves to be a difficult and dangerous plan of action.

Okay, so the set-up is a bit complicated. Overly complicated, I actually thought. There was a lot of potential for the characters to go on an emotional journey together, given their past baggage, but they just…don’t. No one’s problems are explored with any depth, sensitivity or empathy. So why such a complicated beginning plot? If you’re never going to deliver any emotional catharsis for the characters, or explore the themes of rape, loss and grief, why even include them in the story? I didn’t understand it. The characters simply move past their grief with limited thought, which I thought was very shallow characterization.

Speaking of characterization, the characters were paper-dolls with strange viewpoints designed not to anger readers. For example, Morren is pregnant by her rapist(s). But, she loves her baby, without reservation. …I mean, I found it unrealistic that Morren had no mixed feelings about her pregnancy. I just wish the author would have let Morren be more conflicted about the baby. Like, let the girl have her anger, let’s explore it, because she has a right to be angry and sad about this. There’s no discussion of the complexity of Morren’s situation, only tired moral platitudes that we’ve all heard before. Trahern, by contrast, was…all right. He also had a pseudo-sad backstory that was complete window-dressing, and that’s about it.

To sum up, I was pretty unmoved by the superficial romance, lack of historical detail and very spare, plain writing style. Not a good story me, personally.
Tweet